on August 25, 2016
when we were planning our trip to the Netherlands, we were offered some tickets to Efteling Theme park in Kaatsheuvel. Tilly has grown up going to theme parks and was a regular visitor to Chessington and Legoland but this theme park totally out ranks them in the leader board for one of the best theme parks we have been to. 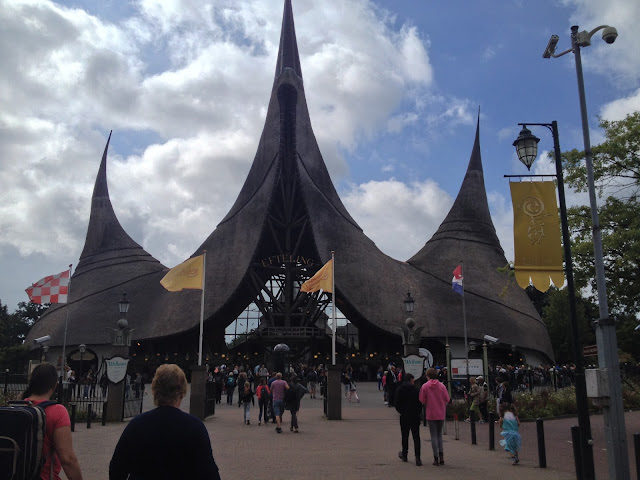 You pay to get in and then all of the attractions, rides etc are free and the promise of a world of wonders is fulfilled every moment of the day. The theme park didn't look that big from the outside, but once you get inside, there is something different to see around every corner. You don't even need to take your pram to the theme park, because for 4 Euro's you can hire on of theirs which actually looks more like a cart, and because Tilly saw one, she had to have it! it is such a good thing to hire because you can even use it to put your bags of packed lunch in - saves you carrying it. 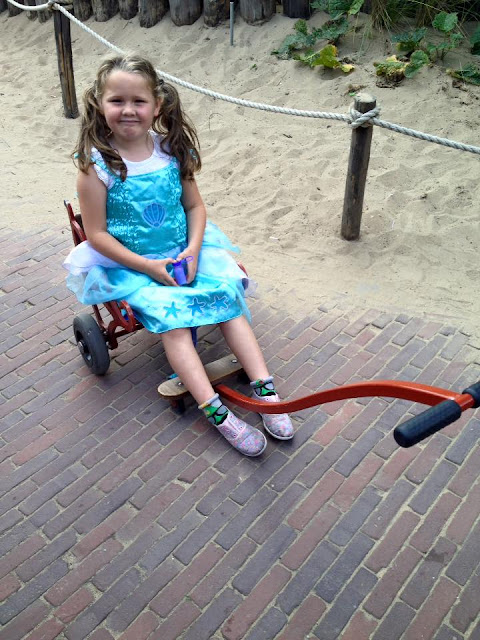 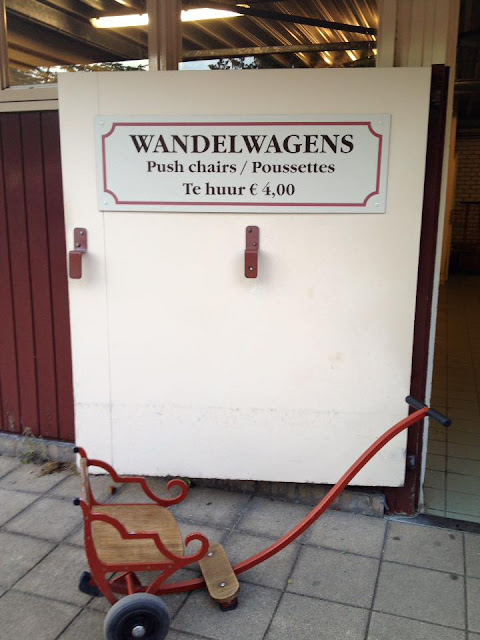 We had promised Tilly a trip to a fairy tale theme park and that is what we got with Efteling. We had to queue to get in, but it was August and the place was full of families on the school break. They were trying to make the most of the last few weeks before they had to go back to school. Once we got in we headed straight to the Fairytale Forest, where Tilly was in her element. You walk around a small forest and again at every turn there is a different fairytale to watch. We watched the witch climb Rapunzel's tower and the magical red shoes dancing. Some fairy tales are from Europe and Tilly wasn't familiar with them and they spoke dutch, but she enjoyed them none the less. So many kids grow up with Disney movies, and that is the only way they know the fairy stories, but these characters in the fairytale forest, look just like they are in the original books. Towards the end we came across a donkey, you had to feed it with 50 cents and he lifted his tail to ''poop'' out a gold coin for your child. Tilly found this highly amusing. 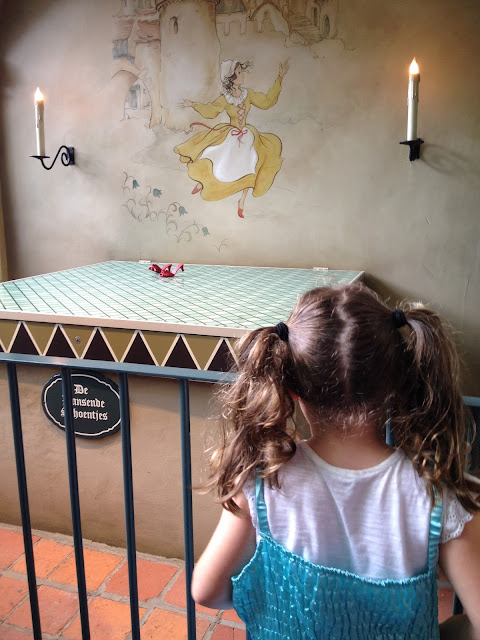 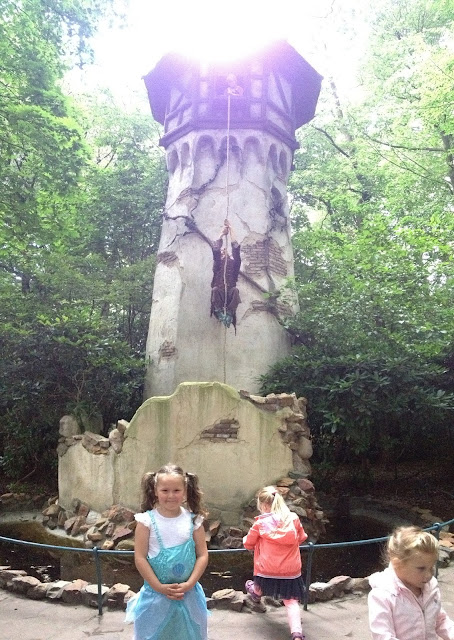 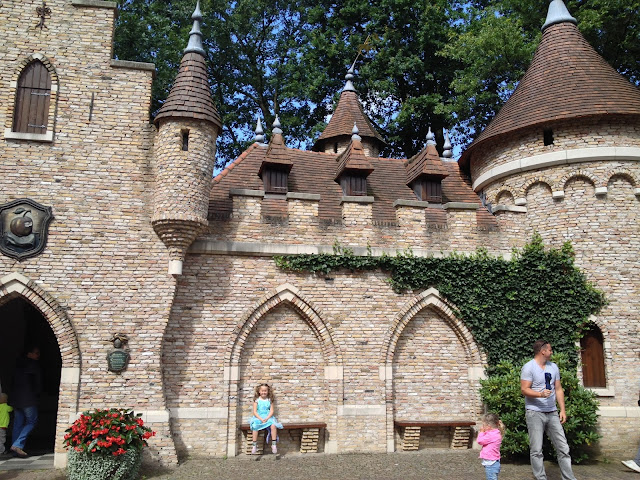 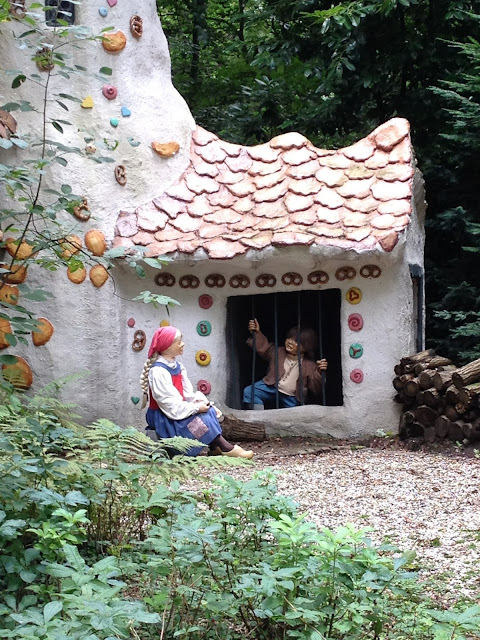 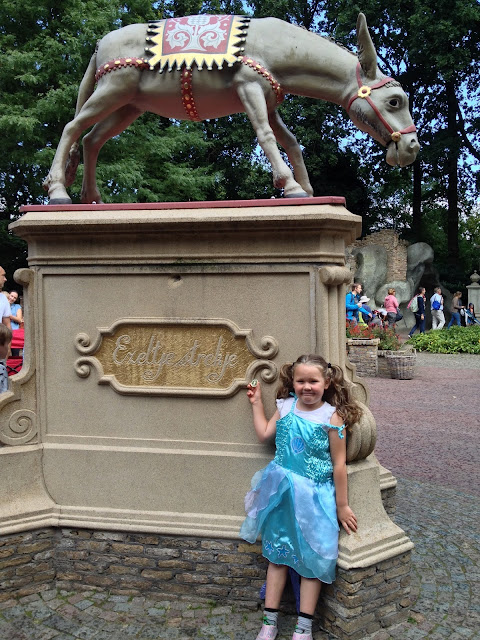 It did take a while to go around the fairy tale forest because Tilly soaked up all of it, I thought to myself that we had only done a small proportion of the park - How were we going to fit the rest of it in, in a day! After a toilet break (there were toilets all over the park and easy to find), we found the carousels and these are my kind of rides! after a few rides. 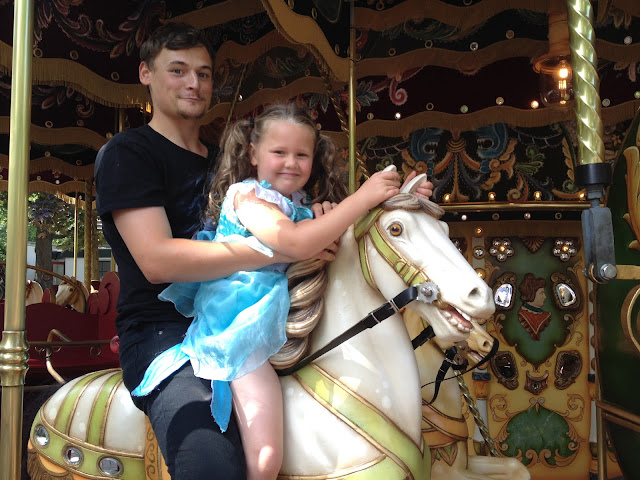 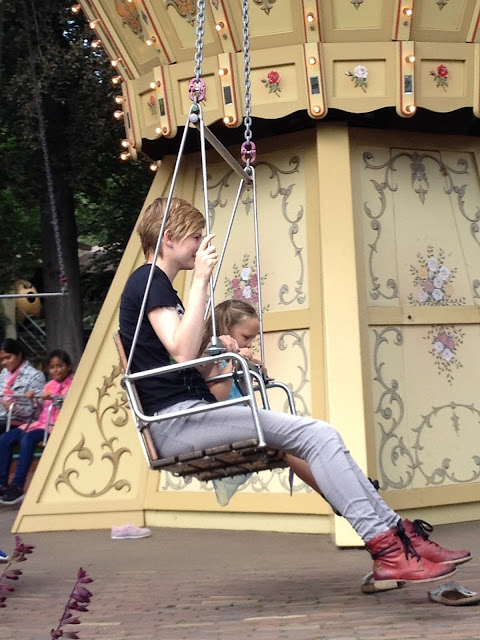 We decided it was time for some lunch, we hadn't bought a picnic and we were prepared for extortionate prices, but we were pleasantly surprised to find we could have a feast for less than 10 Euro's. This puts other theme parks to shame because they normally hike prices up, knowing we will pay it. The food was good and served very fast, we used the toilets again and made our way to some more rides. Amber told us about the Carnival Festival ride, where we travel around the world with Jokie and Jet (just think Its a small world at Disneyland and you have the idea of the ride). The queue was huge, but moved pretty steadily, it would have been nice for the kids to have activities to do along the way. My 22 year old got bored, so you can imagine how difficult it could be for a child waiting. But we soon reached the front of the queue and got on the ride. It was worth every moment of the waiting we had done. 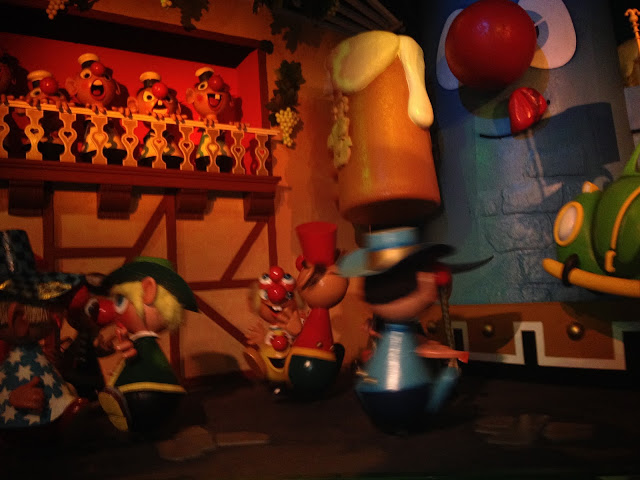 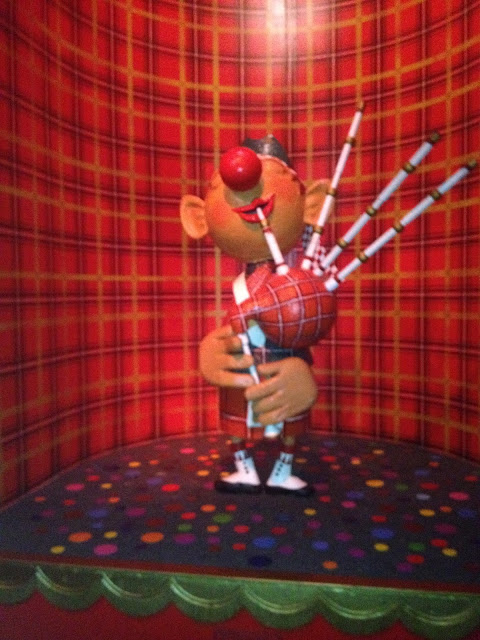 We left the ride and decided that if we were going to cover the whole park in a day we would have to split up and do things separatly, I would stay with Tilly and do the kids rides (because thats how hardcore I am) and Zach and Amber could go and do the roller coasters. We arranged to meet in an hour, but that went terribly wrong because they queued for a roller coaster ride and they had to queue an hour just to get on, so Tilly and I decided to get a few extra rides in whilst we waited. We saw the Pergode ride, I have never been on anything quite like it in my life, you go into a little Asian pergola and rises to 45 meters above the park, rotating as it goes. you get an amazing panoramic view of the park and can take some amazing pictures - also good for looking for lost son's and their girlfriend. As we still hadn't managed to meet up with the other guys after the Pagode ride, we crossed over the path and went on a Gondeletta, it was a perfect way to spend 20 minutes relaxing and getting glimpses of the rides as we soaked in the sun. 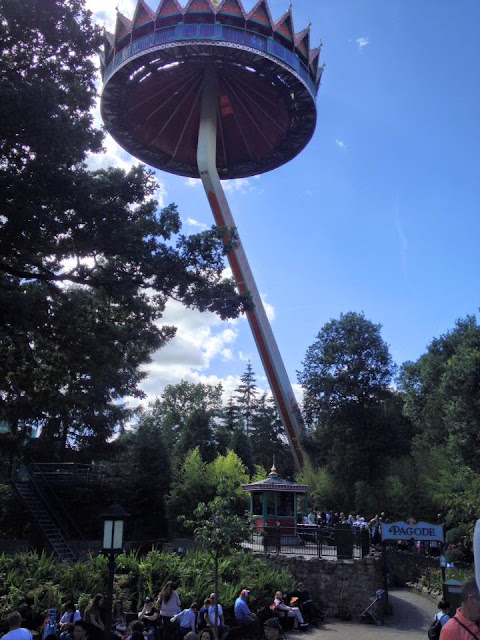 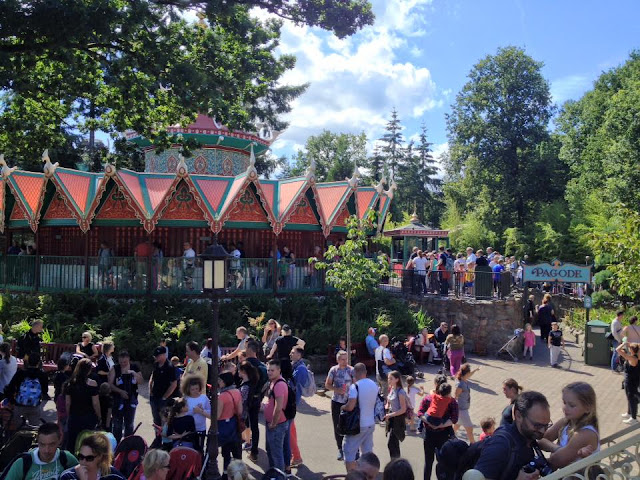 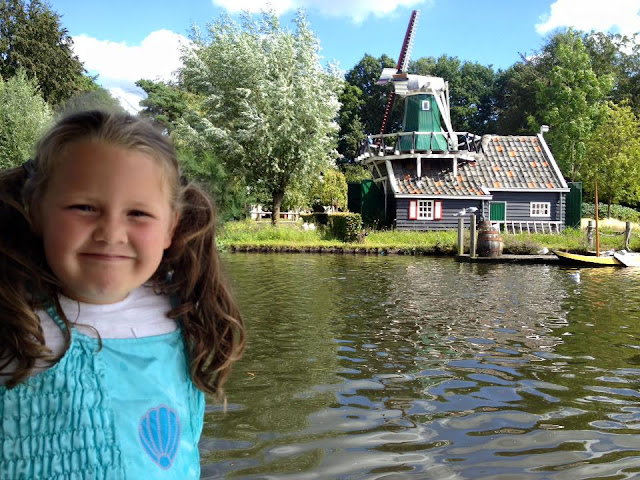 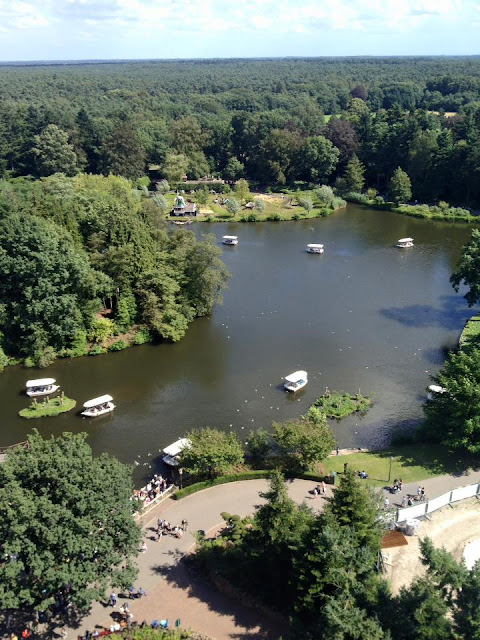 Finally we met up with the other guys, who had time to go for an ice cream and have another go on another ride whilst we had queued for the Gondeletta and taken the leisurely ride. The day was starting to come to an end, so it became a mission to get as many rides done as we could before we would be heading hime, so as Zach and Amber headed towards the Dive roller coaster, Tilly and I went to enjoy the De Oude Trufferbaan, A ride with classic cars that takes you around a track. then we arrived at the Dive Rillercoaster in time to see Zach and Amber take the plunge! 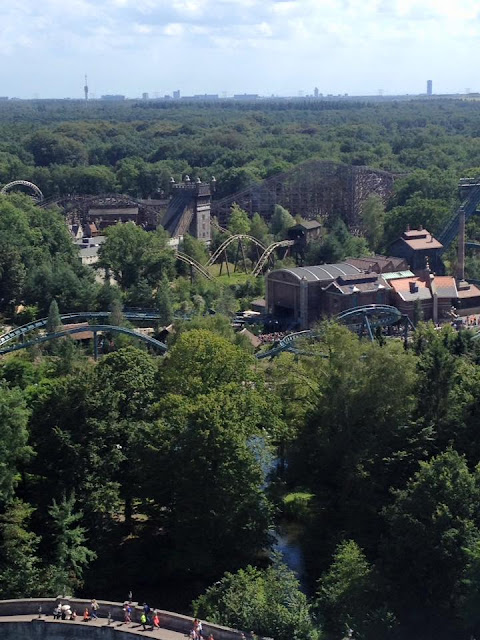 We had time to grab something to eat and drink again at a sausage stall, again very very affordable. Before we headed to The Pirana, a rapids ride and Bob, the bobsleigh ride, where the carriage you are sitting on actually comes off tracking and you find yourself speeding down a bobsleigh track.

The day finished with the the water show Aquanura, We watched as four frogs bought the Efteling fairy tales to life in this amazing show with 200 fountains and 900 lights. With lights and the music, this really is a magical show to watch, although I would imagine that it is better to watch in the winter when it is dark as you get the full effect of the lights. Leaving the park was sad but easy, we purchased a car park ticket for 10 Euro's and it was quite quick to get out. 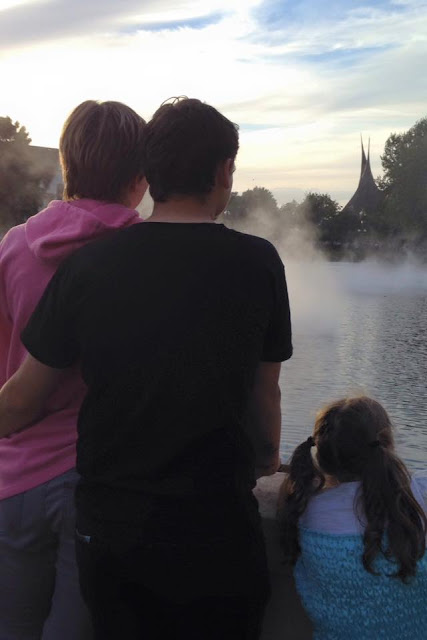 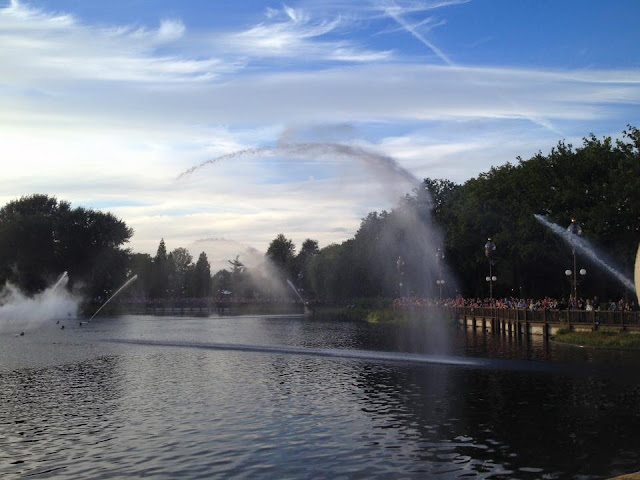 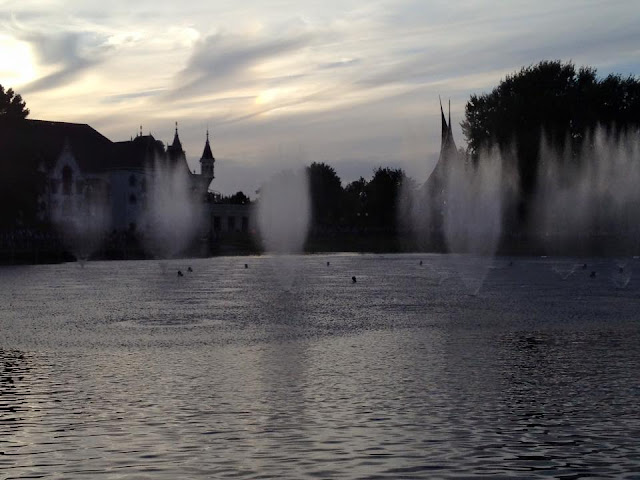 A day really isn't long enough to visit Efteling, I would suggest at least two days, we didn't get to go on all of the rides and the only show that we saw was the water show. We will return again, maybe next time we are in The Netherlands, but will book the on site hotel. More details of the Park can be found at www.efteling.com. Tickets start 38 Euro's on the gate and children under 4 go in free, which is fantastic because there is still so much for the little ones to do in there. Efteling is open every day of the year too, even Christmas day. We really recommend you add Efteling to your trip to The Netherlands.

There were two things that we didnt like about Efteling, one was the smoking policy, in the UK we have become a country that doesn't have smoking in public areas, so to be standing in a queue and having someone blowing smoke in your face, wasn't my idea of fun. But we are not in the UK at Efteling and we do need to respect that this is how they do it in The Netherlands. Another thing was nothing to do with the park, but just the visitors ..... I actually don't think they know how to queue! Maybe again its an English thing, we seem to queue for everything, but some of the Europeans had other ideas.