We Went To LegoLand Windsor

on May 17, 2016
On Saturday, Tilly took a trip to Legoland with myself and Kimmy. The reason for the day out was for Kimmy's birthday - yes, even at 24 years old, Legoland is still fun!

We took the train to Windsor and there was a but that took us from outside Windsor Castle and took us right up to the entry gate, but take note of which bus company you use because if you buy a return ticket you will need to use the same company to get back to Windsor. We paid £10 for a family ticket, which I thought was an okay price and it does take you from point to point.

We got to the park, just before 10am and collected our tickets from the booth. The gates were open and we could window shop or use the loo whilst you waited for the rides to open. As 10 o'clock struck, we were allowed to go to the rides, if you want to go on some of the most popular rides this is the best time to go because you will literally only have a few minutes wait. We always do the rides in the same order and on the way down we stopped at the Viking River Splash, This is a rapids ride and Tilly has only just got to be old enough for the ride, so this was her first experience. This ride is a very wet ride, with people on the sides shooting water at you. It is a rapid ride and a thrill a minute. Luckily it was a sunny day so we dried pretty quickly. 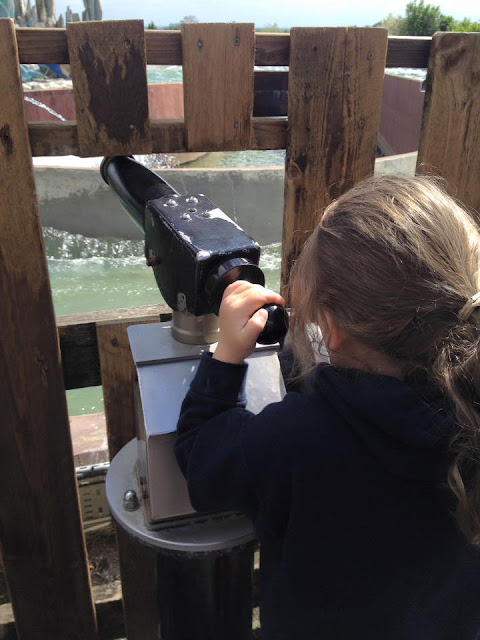 Then we headed to the Pirate shores and went down the Pirate Falls ride, which is a log ride and also the Jolly Rocker ride. This was Tilly's first time on both these rides and she loved them both. We took advantage of the ride photo digital band which was £30, This seemed such a good price because individual pictures are £10 each. With the digital band, you can print the pictures at your leisure and also share on your social media. Although this was a good value thing to buy, it is only a money saver if you intent to buy pictures. Most of the rides had a problem putting the pictures on the band and we ended up with  a load of receipts that we had to keep in a safe place, and wait 24 hours until they were available to go online. This was rather annoying as you had to make sure they stayed safe and dry all day. We were told by various photo stands that we could take the band and the receipts to the photographer stand at the entrance of the park and they would do it for us, but after we hiked up there, we were told they couldn't do it. It all seemed a bit disorganised but I think it is a new scheme as I have never noticed it before. We saved a lot of money by doing it this way. 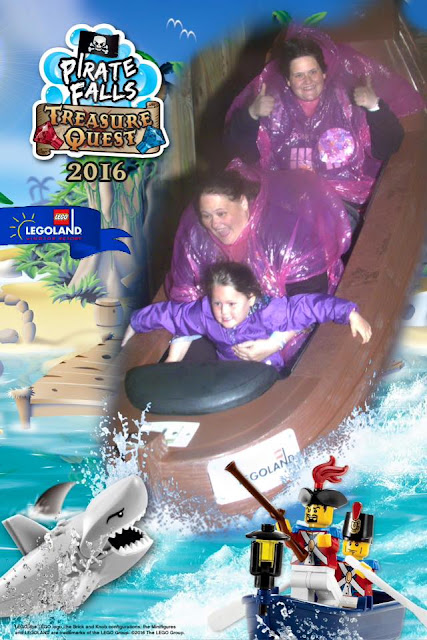 We went to Knights Kingdom and went on the small roller coaster and then went to the Dragon ride, we queued for a good half hour to be told it had then broken down - just as we had sat in the roller coaster. What a bit of bad luck and Tilly was really disappointed but we were given ride passes to jump the queue on another ride. Rides do break down and its all part of visiting a theme park and in my own opinion, if a ride isn't safe, I would rather they closed it.

We took the train around the park and shot Lego things in Laser raiders before settling down to eat some lunch whilst watching a pirate show in the Heartlake City area. We took half a picnic with us, but needed to buy some sandwiches, these cost us £3.95 and it was very nice. You have a varied option of places to buy food and drink within the park, so there is always somewhere to fill up! As a mum to a little girl, I LOVED the Heartlake City area, It was so pink and purple and it was full of Lego Friends things, There is even a studio where you can have your picture taken against the news backdrop or the weather. Again these pictures were put on to the digital band (or in our case we were given a receipt with a code), As well as Heartlake City being new, there is Mia's Riding Adventure which is a cute pony ride that is more thrilling and exciting than you think! 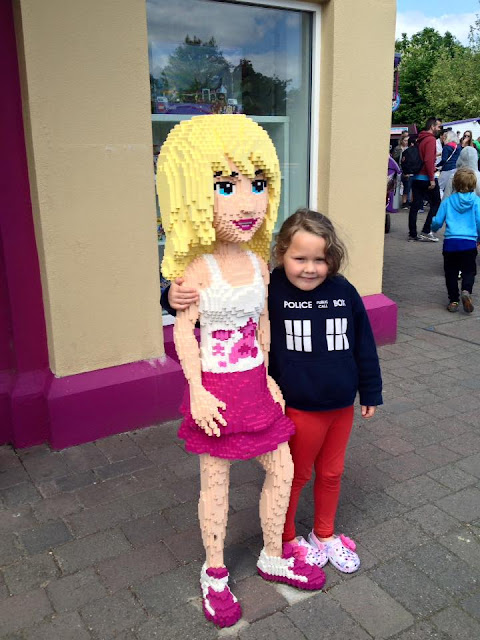 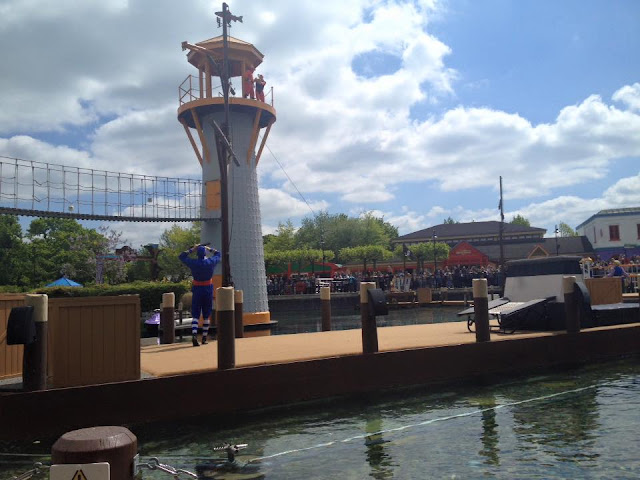 We headed towards Coastguard HQ, a chance for Tilly to steer a boat on a lake. We queued for about 40 minutes and when we got to front, we went to get in a boat, I got in one and Tilly & Kim got in another. I was told to get out and get in with the other two, which I didn't mind but the man had seen me get in the second boat and then I had to get in with Kim and Tilly. I got in the boat, now Kim and I are quite large ladies so we both got in the same boat and tilly was sat in the middle - I say sat but she was actually stood up and she couldn't fit in the seat with us. The staff seemed happy to let her stand as she went and off we went. The same thing happened when we went to go down the Raft Racers in Duplo Land. We queued for over 20 minutes to get on the ride and I was told one of us couldn't go down or I would have to wait until my daughter came up again to go with me. The other option was to go down with someone else's child - to be honest I wouldn't want my child to go down a ride with a random person! So we decided to wait and it was a bit sickening to know we had queued for that long and then to let loads of other people go before us. There had been no signs saying 'no single riders'. Eventually a single adult came down and we could go, but the fun was taken from the ride and we were really disappointed. But for Tilly right at the bottom was the Splash park, where she could play in the water. She loved this but I warn all parents, it is difficult to get your kids away from there. We took a towel with us, so its a good idea to add a towel and maybe some spare clothes in your bag.

We went on Atlantis, always a winner with kids, because it really looks like you are going under water and it really does add to your child's imagination. There is always a queue for this as it is so popular, so it is probably best to do this at the start of the day. Another winner with the kids is the Driving School, Tilly has progressed from L-Drivers to Lego City Driving School now that she is 6, I didn't think she would understand the whole concept of stopping at the traffic lights but she surprised us as she did really well. We bought her a driving licence but only had to pay £5 instead of £10 because we had paid for the digital band. Tilly used the ride ticket here, so she jumped the queue and therefore saved a fair bit of waiting time. 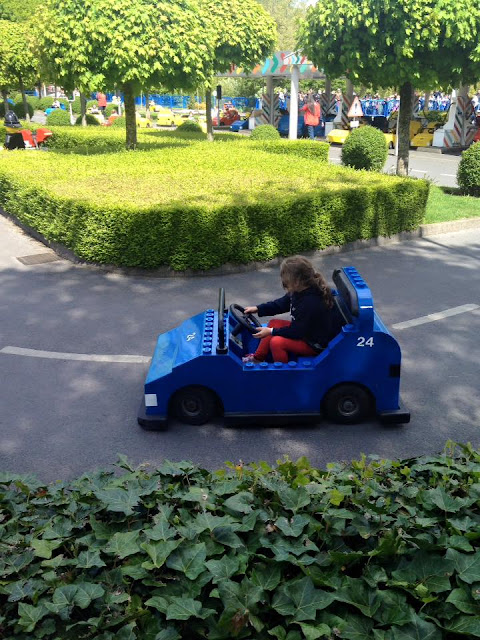 The last thing we did was the Lego Star Wars display, this is a winner for kids and adults of all ages! with the new film only just being released in the past few months, this is a popular attraction to visit in the park. 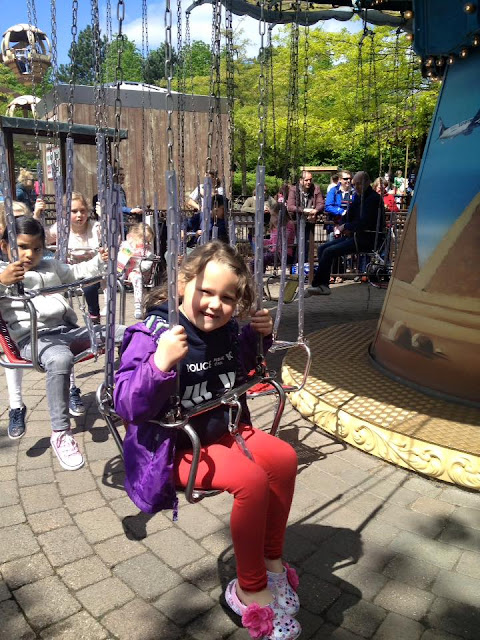 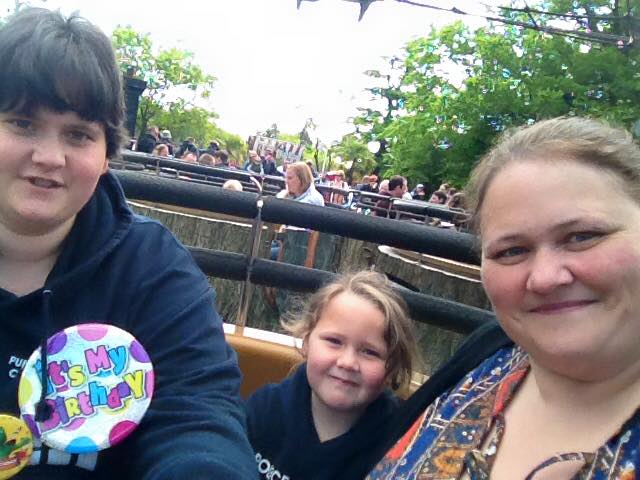 We didn't have time to do everything in the Legoland, but we had chosen to do some of the favourite rides a second time.  I would suggest to anyone else that you book for two days and either stay at the onsite hotel or somewhere close by. We stayed at a hotel in Feltham and it was a 20 minute train ride away from Windsor. Legoland is as low as £37 if you buy the tickets from here 7 days or more in advance. You can buy tickets on the gate, but if you are doing that, it might be a good idea to get some BOGOF vouchers and you save alot of money, that you can then spend in the park. It really is a good idea to do two days at Legoland, because there was so much more for us to see (although we had done them before).